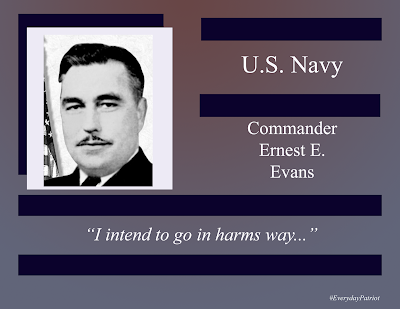 Commander Ernest E. Evans was born on August 13, 1908, in Pawnee, Oklahoma.  After his graduation from Musegee's Central High School in 1926, he enlisted in the U.S. Navy.

In June 1927 he was appointed to the U.S. Naval Academy at Annapolis and graduated with the class of 1931.

Initially assigned to the Naval Air Station in San Diego, California, he then began to work up the ranks on ships.

He was assigned to the destroyer Alden which was patrolling the East Indies during the attack on Pearl Harbor, and in March of 1942 assumed command of the Alden.

In 1943, Commander Evans was given command of the new destroyer, the Johnston, which successfully engaged in a submarine encounter before assigned to accompany the task force engaged in the Battle of Samar, where he earned a Congressional Medal of Honor during the confrontation for his command and his continual engagement of the enemy.  Ultimately the Johnson was sunk and Commander Evans was never recovered. He is memorialized at the Manila American Cemetery and Memorial.
Biography Congressional Medal Of Honor Missing WWII
Location: Pawnee, OK 74058, USA