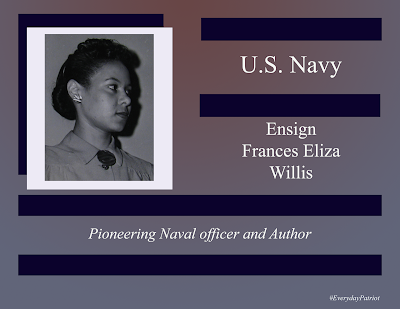 Ensign Frances Eliza Wills was born in Philadephia but made her way to New York City early in life to attend Hunter College.

She volunteered for the U.S. Navy in November of 1944, attending the Naval Reserve Midshipmen's School at Smith College.

Upon graduation, she, along with Lieutenant Harriet Pickens, became the first woman Naval officer of African descent. She was assigned to teach naval history and to administer classification tests.

After her discharge, she wrote a book about her experiences called "Navy Blue and Other Colors".  She was also active with the auxiliary of the Brooklyn Botanic Garden.