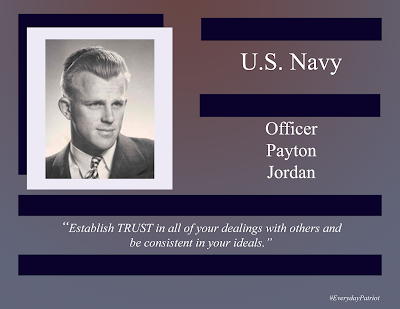 The U.S. Naval officer Payton Jordan was born on March 19, 1918, in Whittier, California.

A highly talented athlete, he attended Pasadena High School and the University of Southern California where he was a member of both the football and the track teams and in 1939 was the captain of the Collegiate Champion team.

Although an Olympic hopeful, WWII canceled the games and Officer Jordan instead joined the U.S. Navy.

After his service, he became the coach at Occidental College and then Stanford University.   His coaching ability was notable and his athletes were consistently high performers.  In 1968 Payton Jordan coached the U.S. Olympic team who famously won 24 medals and set six world records.

In 1972 Payton Jordan began to compete again in the USA Track and Field Master's division.  During his second running career, he set two world records and two American records.

Payton Jordan has been inducted into the USA National Track and Field Hall of Fame and the USATF Master's Hall of Fame.