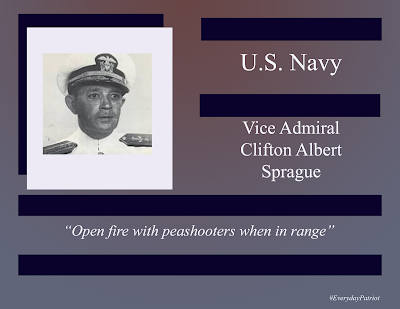 Born on January 8, 1896, in Dorchester, Massachusettes, Vice Admiral Clifton Albert Frederick Sprague was a graduate of the Roxbury Latin School.

Accepted into the U.S. Military Academy at Annapolis, where he earned the nickname "Ziggy", he was actually commissioned a year early due to U.S. involvement in WWI and assigned to the gunboat the Wheeling.

Vice Admiral Sprague began training as a Naval Aviator, graduating on August 11, 1921, and served as a test pilot, significantly contributing to the development of the aircraft carrier catapult systems and the MARK1 aircraft arresting system.

Returning to Annapolis, he served as the executive officer squadron VN-8D5 until 1931, when he was assigned to Panama, and then Hawaii. He became the first pilot to fly the 13 hour Hawaii to Midway run, as well as serving as the air operations officer at the Naval Air Station and as air officer of the carrier Yorktown.  In 1940 the Navy sent him to the Naval War College, after which he was given the command of the Tangier, in the port of Pearl Harbor.  The Tangier survived the attack on December 7, 1941, and actively returned fire.

For a short time, he was assigned to the defense of the Southeast coast of the U.S. as well as the Naval Air Station at Sandpoint and then was given command of the carrier Wasp, which participated the attacks on the Marcus and Wake Islands, the invasion of Saipan and the Battle of the Philippine Sea.

After WWII, he served as commander of the Naval Air Group supporting Joint Task Force 1, which ran the nuclear tests on Bikini Atoll and the Marshall Islands, then as chief of Naval Air Basic Training and finally as the Commander of the Alaskan Sea Frontier, becoming the first Naval officer to fly over the North Pole in November 1950.

Vice Admiral Sprague retired from the U.S. Navy in November 1951 and died of a heart attack on April 11, 1955.  He rests at Fort Rosecrans National Cemetery.