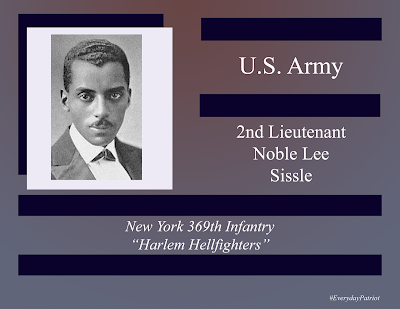 2nd Lieutenant Noble Lee Sissle was born on January 10, 1889, in Indianapolis Indiana.  He was always a talented musician who sang in church choirs and was a soloist for Central High School's Glee club (his family briefly lived in Cleveland Ohio).

Deploying to France, in May 1918 and fighting under France's 16th Division,  the "Harlem Hellfighters" spent 191 days in combat.

They also brought Jazz to France.

After the war, Lieutenant Sissle returned to the civilian Europe band, briefly holding it together with Eubie Blake after James Europe's murder.

Eubie Blake and Lieutenant Sissle would continue to collaborate over the years, writing hit songs and performances, including the songs for Josephine Baker's "Shuffle Along" and "Chocolate Dandies".

Lieutenant Sissle also helped establish the Negro Actors Guild and developed "Shuffle Along" into a USO show during WWII, and in 1950 was named an honorary Mayor of Harlem.

Lieutenant Sissle maintained a grueling schedule of band work and theatrical production development until he retired to Tampa Florida during the 1960s.  He died on December 17, 1975.