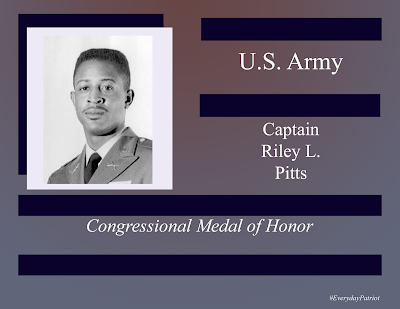 He worked briefly with the Boeing Corporation before joining the U.S. Army.

Captain Pitts initially was an information officer but transferred to a combat role and was assigned to the 27th Infantry Regiment, where he commanded C Company.

Captain Pitts earned a Congressional Medal of Honor on October 31, 1967, while assisting another company under fire. Leading an assault on enemy positions, he completely disregarded his own safety in his attack, once throwing himself on a rebounded grenade (it failed to explode), and maintain continuous fire throughout, until he succumbed to wounds.

Captain Pitts is the first American officer of African descent to win the Congressional Medal of Honor.