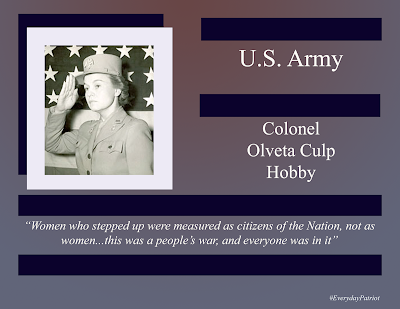 She began working as a parliamentarian for the Texas House of Representatives before joining the staff of the Houston Post in 1931.

During WWII, she became the director of the newly created Women's Army Auxiliary Corps, which was created to fulfill the non-combat roles left vacant after the fighting commenced.  Colonel Hobby created the enlistment standards and code of conduct and was instrumental in getting women service members equal access to military benefits and pensions.  She returned to civilian life and her career at the Houston Post after the war.

She became the first female secretary under President Eisenhower, appointed to head the Department of Health and Human Services on April 11. 1953.  Her legacy includes the approval of the polio vaccine.

In 1955 she resigned as secretary, returning to the Houston Post and served on several other civic and corporate boards, including the Corporation for Public Broadcasting.