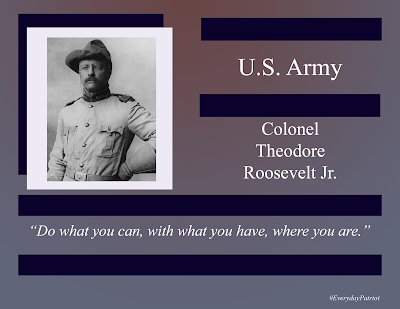 Colonel Theodore Roosevelt Jr was born on October 27, 1858, in New York City, New York.  While young he had health issues, including severe asthma, which he conquered when he began hiking in the Alps in 1869.   After learning the benefits of exercise, Colonel Roosevelt was an avid fitness buff for the rest of his life.

Another lifelong love of Colonel Roosevelt was zoology and at seven, he began, with cousins, a natural history museum featuring animals he had found or trapped and taxidermied. He also wrote, "The Natural History of Insects" at age nine.

He was educated mostly at home until he entered Harvard in September of 1876. Graduating Phi Beta Kappa in 1880 he also participated in rowing, boxing, Alpha Delta Phi Literary Society, the Delta Kappa Epsilon Fraternity, the Harvard Advocate, and was a member of the Porcellian Club.

After Harvard, he began law school at Columbia University, but, when he was nominated for state assembly, he became more interested in politics and dropped out.

In 1884 he tried to secure the Republican nomination for President but was beaten by James Blaine.

Regrouping, Colonel Roosevelt moved to North Dakota and built a ranch, where he remained until after the Winter of 1886-1887, which devastated most Western ranches, also took his herd.

Returning to the East, he wrote "The Winning of the West" about his ranching experience, unsuccessfully ran for mayor of New York City and was appointed by Presiden Harrison to the United States Civil Service Commission where he remained until William Strong appointed him to the New York City Police Commissioner in 1895.

In 1897, President William McKinley appointed him Assistant Secretary of the Navy.  When the USS Maine exploded outside of Havana Cuba, he ordered the Navy to prepare for war and then, when the Spanish-American War began, promptly resigned. With US Army Colonel Leonard Wood, he formed the First U.S. Volunteer Cavalry Regiment, known as the "Roughriders", who after training at San Antonio Texas deployed to Daiquiri Cuba, fighting in the Battle of Las Guasimas and in the casualty-heavy charge up Kettle Hill on July 1, 1898.

Returning to the states, he was elected Governor of New York in 1899, serving until 1900 when, after the death of Vice President Garret Hobart, was added as the Vice President candidate.

He was an incredibly active president.  He focused on Anti Trust / Anti Monopoly policies, food safety, labor, railroads, and conservation, including the establishment of the US Forest Service. He issued approximately 1,080 executive orders.  He was also very vocal, giving daily press briefings.


When President Taft became President in 1909, Colonel Roosevelt organized the Smithsonian - Roosevelt African Expedition, where he went hunting for specimens for both the Smithsonian Institute and the American Museum of Natural History.  He wrote "African Game Trails" about his experience.   After Africa, he toured Europe.

When Colonel Roosevelt returned to the U.S., he was displeased with President Taft's presidency and tried to secure the Republican presidential nomination. When that proved unsuccessful, he ran under the Progressive or "Bull Moose" party and survived as an assassination attempt during a campaign speech on October 14, 1912 (he continued his speech and wasn't treated until later).

After the campaign, he went on a South American expedition sponsored by the American Museum of Natural History.  Colonel Roosevelt hurt his leg during this expedition, and additionally, suffered from a relapse of malaria.  His health would decline because of this trip.  He also wrote about his experiences in the book "Through the Brazilian Wilderness".

He briefly thought about another presidential run, but, when WWI began, he was authorized to reopen the "Roughriders".  President Wilson ultimately decided against sending the "Roughrider" divisions, instead, he sent American Expeditionary Forces with General Pershing.

Disagreeing with President Wilson, Colonel Roosevelt wrote "The Foes of Our Own Household", attacking the president's policies.  His attacks were enough to flip Congress to Republican control.  It was during this time his son Lieutenant Quentin Roosevelt was killed.

Although continually encouraged to seek public office, Colonel Roosevelt's health (and grief) were taking its toll.  He died on January 6, 1919, of a blood clot and rests in Youngs Memorial Cemetery.

Colonel Roosevelt was a busy man in life, he wrote 18 books, was a Free Mason, a member of the Sons of the American Revolution, he boxed, played tennis, hiked, rowed, played polo, was an active horseman, practiced judo and was caught more than once skinny dipping in the Potomac.