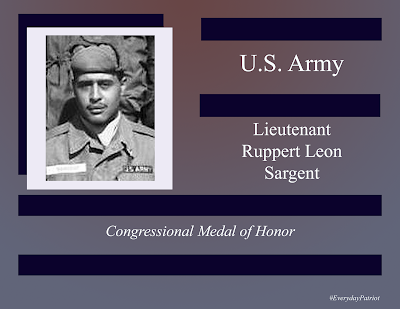 Lieutenant Ruppert Leon Sargent was born on January 6, 1938, in Hampton Virginia.  After graduation from Virginia State University, he enlisted in the U.S. Army in January 1959.

Lieutenant Sargent graduated Officers Candidate School on October 15, 1965, and in 1967, deployed to Vietnam with the 9th Infantry Regiment.

On March 15, 1967, during an investigation of Viet Cong activity and the after the discovery of a tunnel, Lieutenant Ruppert Leon Sargent earned a Congressional Medal of Honor, when Viet Cong soldiers lobbed two grenades from the tunnel into the middle of the platoon.  Lieutenant Sargent smothered the grenades and protected his team.

He rests at the Hampton National Cemetery in Hampton Virginia.