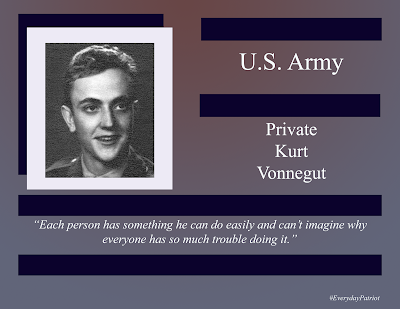 Private Kurt Vonnegut was born on November 11, 1922, in Indianapolis, Indiana.

While attending high school at Shortridge High School he also played clarinet and was a co-editor for the school's newspaper.

After graduation, he enrolled in Cornell University, with a biochemistry major, but by May 1943 he had left school, enlisted in the U.S. Army and trained as a scout.

Sadly, prior to his deployment, his mother committed suicide.

He was assigned to the 106th Infantry Division, during the Battle of the Bulge, his unit was overrun and on December 22, 1944, was taken as a  prisoner and sent to a camp outside Dresden. The prisoners worked and lived in an old slaughterhouse, which, when Dresden was firebombed on February 13, 1945, prisoner casualties were light, as they had been forced to work underground in the meat lockers.

Freed by Red Army Troops after General Patton captured Leipzig, he was repatriated and after discharge, took advantage of his GI bill by attending the University of Chicago.

Private Vonnegut worked briefly for GE as a publicist, selling stories on the side until 1951 when he left GE to write full time.  His first novel Player Piano was published in 1952.

By 1967 he had won a Guggenheim Fellowship, which he used to travel Europe and revisit Dresden.  The 1969 release of Slaughterhouse-Five, taken from his POW experiences launched Private Vonnegut's fame.

Now well known, he toured, giving lectures, and teaching.  He was also elected VP of the National Institute of Arts and Letters.  He was a strong and vocal anti-war advocate.

Over the course of his life, Private Kurt Vonnegut created 14 novels, three short story collections, five plays, and five non-fiction books. (His short story 2BR02B is a favorite).  He was inducted into the Science Fiction and Fantasy Hall of Fame in 2015 and asteroid 25399 is named Vonnegut in his honor.
Labels: Army Biography WWII
Location: Indianapolis, IN, USA