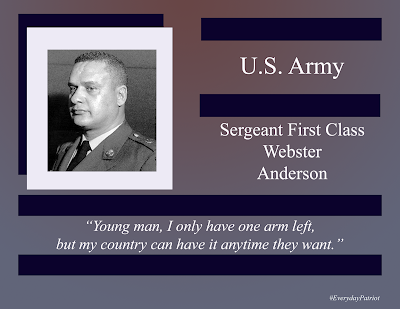 Enlisting in the US Army in 1953, he was assigned to the 101st Airborne and deployed to Korea.

Remaining in the Army after his Korean deployment, Sergeant Anderson was deployed to Vietnam.

Near Tam Ky, Sergeant Anderson earned a Congressional Medal of Honor when his unit came under attack.  He, under fire, climbed onto the parapet of a Howitzer, directing fire, while simultaneously returning fire with a rifle and grenades. He maintained his defensive fire, even when he was struck in the legs with the shrapnel of two grenades, a third grenade exploded in his hand as he tried to throw it back.

Despite the severity of his wounds, he survived, although he lost both legs and one arm.

Retiring from service in 1968, he returned to his home in Winnsboro, South Carolina where he lived until his death on August 30, 2003.