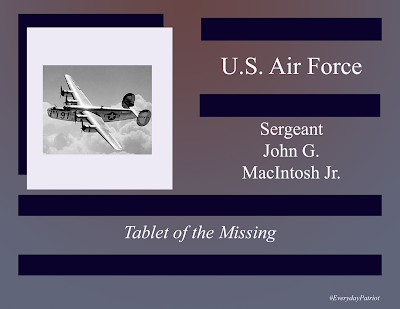 Sergeant John G MacIntosh Jr grew up in Ohio, working as a stock clerk before joining the U.S. Army Air Services in July 1941.

He trained as a turret gunner and was assigned to the B-24 Liberator Unit, 431st Bomber Squadron, 11th Bomber Group, in the Pacific.

Sergeant John G Macintosh Jr is memorialized on the Tablet of the Missing at the Manila American Cemetery and Memorial.