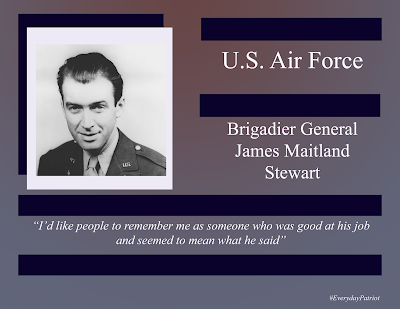 Brigadier General James Maitland Stewart was born on May 20, 1908, in Indiana, Pennsylvania.

He attended Mercersburg Acadamy, where he played football and was a high jumper on the track team.  He also participated in the choir, glee club, the John Marshall Literary Society, and was the art editor of the yearbook. His hobbies included making model airplanes, drawing, and chemistry.  He was an avid fan of Charles Lindberg.

General Stewart then began his collegiate career at Princeton, majoring in architecture but spent much of his time participating in the drama and music clubs, including the Triangle Club, and during the Summer, took part in the University Players, the intercollegiate stock company, which attracted the attention of MGM.

General Stewart obtained a contract in 1935 and after a slow start, became a well-known actor in many films including Mr. Smith Goes to Washington and The Philadelphia Story.  During this period he also learned to fly, earning a private pilot license in 1935 and a commercial license in 1938.

In October 1940 he was drafted into the U.S. Army but failed the physical screening because he was five lbs underweight (he was 6'3'' and 135ish pounds).  Determined to serve, he worked with a trainer and re-attempted enlistment in March 1941.  Still underweight, he managed to talk his way into service.

Considered too old for Aviation Cadet Training, he achieved his wings through the Service Pilot program and was assigned to behind the lines and recruitment duty, including creating an enlistment film. Appealing to his commander, he was finally assigned to the 445th Bombardment and in October 1943 deployed to England and flying more than 20 combat missions, which included leading the 2nd Wing attack on Berlin on March 22, 1944.  He returned to New York on August 31, 1945.

After WWII, he returned to acting, his first film was It's a Wonderful Life.  General Stewart also began to branch out, appearing in Westerns and Hitchcock films, including Vertigo and Rear Window.  He summarily rejected war movies.

Later in life and in semi-retirement, he appeared on the small screen, as well as making appearances on the Jack Benny Show and the Tonight Show. He also fought against the colorization of black and white films.

He also actively participated in the Boy Scouts, the Sons of the American Revolution and other programs to bring attention to the U.S. Constitution and the Bill of Rights.  General Stewart also wrote poetry.