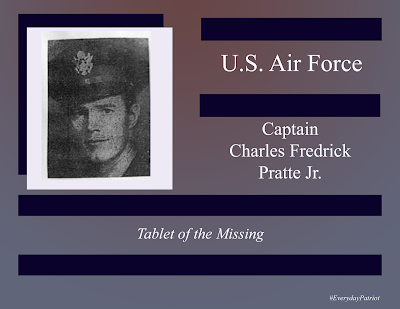 Captain Charles Fredrick Pratte Jr. was born on March 29, 1915, in Fall River, Massachusetts.  He and his family relocated to Warren, Rhode Island, where, in 1937 he began attending Rhode Island State College and participated in ROTC.

He enlisted in the U.S. Army Air Force on April 8, 1941, and after training, was assigned to the 42nd Bombardment Squad and stationed at Hickam Field, Hawaii.

An accomplished pilot, he participated in the Battle of Midway and provided air support during the US Navy's Guadalcanal and North Solomon Campaigns.  He was also part of the offensive of the Gilbert and Marshall Islands.

In March 1944, while piloting the B-24 "Belle of Texas" he was attacked and the plane severely damaged.  Captain Pratte, having to make an emergency landing, had his crew tie parachutes to the gun mounts to provide enough drag to compensate for the damaged brakes, bringing the plane down safely.  The "Belle of Texas" was repaired and renamed "Patches", continuing to fly until January 22, 1945, when the plane and all aboard disappeared after taking off from Saipan.

Captain Charles Frederick Pratte Jr. is honored on the Tablet of the Missing in Honolulu, Hawaii.