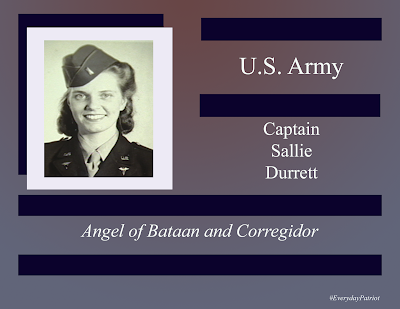 Captain Sallie Durrett was born on October 3, 1914, in Louisville, Kentucky.

After her graduation from JM Atherton High School in June of 1932, she attended the SS Mary and Elizabeth School of Nursing, graduating in 1935.

She joined the U.S. Army and was assigned to Manila, Phillippines.

During the Battle of Corregidor, Captain Durrett continued her duties in the Malinta Tunnel until the fall of Corregidor in 1942.  She was then taken, with the other nurses, to the prison camp at Santo Thomas, where she remained a prisoner of war until January 1945.  She, like the other nurses, was nearly starved, most losing up to 30% of their body weight.

After the war, she continued to work as a nurse, retiring from the Children's Hospital in Columbus, Ohio.

Captain Durrett was an active member of the VFW, the Defenders of Bataan and Corregidor, and the Disabled American Veterans.  She also volunteered for the Red Cross.

In 1994, she was inducted into the Ohio Veteran's Hall of Fame.