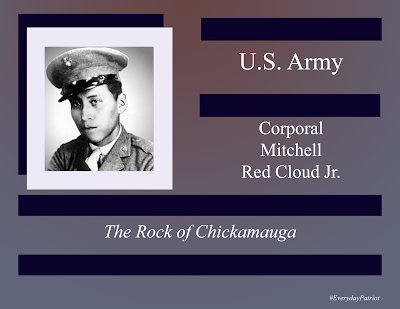 He attended Neillsville High School, although he left at 16 to join the U.S. Marine Corps in August of 1941.

He was initially assigned to the 9th Marines but applied, and was accepted into Marine Raiders training.  He deployed during the Battle of Guadalcanal and took part in Carlson's Long Patrol but was hounded by tropical diseases and had to return to the states in 1942.

After he recuperated, he was assigned to the 29th Marines, deploying to the Battle of Okinawa where he received a shoulder wound.  At the ending of WWII, in 1945, he was discharged from the Marines at the rank of Sergeant.

From 1945 to 1948, he lived in Wisconsin, working with an anthropology study of Native American child care customs, and writing.  He published an article in the Wisconsin Archaeologist about the 1832 Black Hawk War.

In 1948, he re-enlisted in the military, this time the U.S. Army, and was assigned to the 19th Infantry.  His unit deployed to Japan for the occupation.

When war broke out in Korea, his unit's proximity put Corporal Red Cloud into combat immediately.  Corporal Red Cloud found in the Battle of Taejon, participated in the Pusan Perimeter Campain and played combat roles in both battles of the Naktong Offensive.

Corporal Mitchell Red Cloud earned a Congressional Medal of Honor on November 5, 1950, while operating at a forward listening post and spotting enemy troops.  He immediately raised the alarm and opened fire.  He continued to fire, despite being several wounded, at one point requesting to be tied to a tree so he could continue to fight. While his position was eventually overrun, his actions gave his company time to evacuate wounded, gather their forces and ultimately turn back the enemy attack.

He rests in Decorah Cemetery at Winnebago Mission WI.