A Soldier's Story: General of the Army George Catlett Marshall 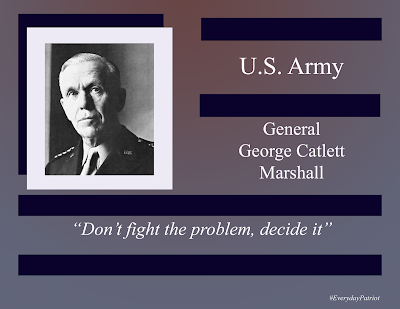 General of the Army George Catlett Marshall was born on December 31, 1880, in Uniontown Pennslyvania.

He graduated from the Virginia Military Institute in 1901 where he played football.  After graduation, he was the commandant of students at the Danville Military Insitute until he received his commission from the U.S. Army in February of 1902.

General Marshall's career as a strategist began with his appointment to the Presidio as aides de camp of the Western Department.

When WWI erupted, he was assigned Chief of Staff for operations of the 1st division, winning recognition for his planning of the battle of Cantigny.  He was then assigned to headquarters, with General Pershing, to plan the Meuse-Argonne Offensive.

Between the wars, General Marshall commanded the 15th regiment in China, taught at the Army War College, assisted command at the Infantry School at Fort Benning and commanded the 8th Infantry at Fort Screven.   He also served command posts at Fort Moultrie (where he also responsible for district 1 of the Civilian Conservation Corps), the Illinois National Guard and finally as the commanding officer of the 5th Brigade of the 3rd Infantry and responsible for the 35 Civilian Conservation Corps Camps in Oregon and Washington.

In July of 1938, he was assigned to the War Plans Division, and with the retirement of General Malin Craig in 1939, he became the Chief of Staff - the same day Germany invaded Poland and he was tasked to create and build the largest Army is history and overcome the challenges of troop training and replacement during a time of war.

After WWII, he was sent to China to try and prevent the Chinese Civil War but could find any common ground.  President Truman then appointed him Secretary of State and he was tasked to plan the rebuild of Europe, his plan, known as The Marshall Plan, along with his post-war peace plans earned him the Nobel Peace Prize.

At the outset of the Korean War, President Truman, frustrated with the lack of preparation, appointed him Secretary of Defense, which required a Congressional Waiver, because, as General of the Army, he was still a member of the military.  He served until September 1951, when he retired.

During his retirement, he tended his garden and enjoyed horseback riding, briefly returning to public life in 1953 as head of the American delegation at the coronation of England's Queen Elizabeth.