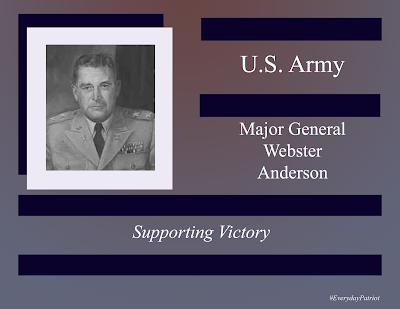 Major General Webster Anderson was born on June 1, 1906, in Boston, Massachusettes. He and his family relocated to Tecumseh, Michigan, where he graduated from high school in 1924.

Accepted into the U.S. Military Academy at West Point, he graduated in 1928 and began a career in logistics.

In WWII, while assigned with the Office of Quartermaster General, he developed a "knockdown pack" system, saving substantial amounts in the costs of military shipments to the European and Pacific Theaters.

He then moved to the Allied Force Headquarters and began focusing on fuel transportation and helped develop the Army / Nave Joint Supply System.

Major General Webster was then assigned to Manilla, continuing the coordination of fuel supplies through the reconstruction of the Pacific, and the subsequent deployments to Korea.

He continued quartermaster assignments, through Europe and the United States, until 1961, when on April 14, he was appointed Quartermaster General of the U.S. Army, serving until 1962 and the phasing out of the position.  He returned to command positions within  U.S. Army logistics until his retirement.