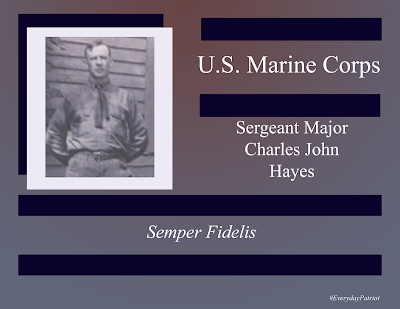 He enlisted in the U.S. Marine Corps in 1897, deploying Cuba during the Spanish American War, after which, he returned stateside, until deploying again to Nicaragua, and then Mexico for the Occupation of Vera Cruz.

Sergeant Major Hayes then deployed to France during WWI and participated in both the Aisne Marne Campaign and the St Mihiel Campaign.  His final deployment was to Haiti in 1920.

He retired from the U.S. Marine Corp in 1930 and continued to serve the community through participation in the Elks Lodge and Moose Club. He was also an active member of the American Legion.