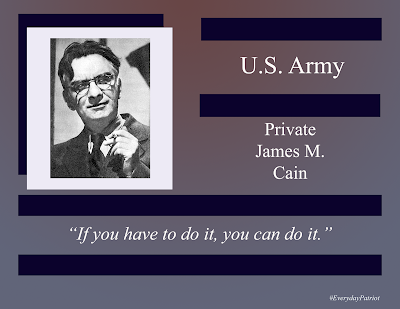 In 1910 he graduated from Washington College (at age 18) and began working on his Master's degree at Washington while also teaching at the college.

He began his career in journalism in 1914,  first working for the Baltimore American and then the Baltimore Sun before enlisting in the U.S. Army during the final year of WWI.

Private Cain was assigned to the 79th Division and edited the weekly divisional newspaper, "The Lorraine Cross" leaving the service at the end of the war and returning to his career in journalism, writing for the New York World and American Mercury, as well as the New Yorker.

In 1934, at the age of 42, he released his first novel, "The Postman Always Rings Twice", launching what has become a well-known career as a noir author, writing more than 20 novels and short story collections and several original screenplays.

Private Cain's novels have also been adapted into films, many more than once, including what was to become Joan Crawford's academy award winner, "Mildred Pierce".