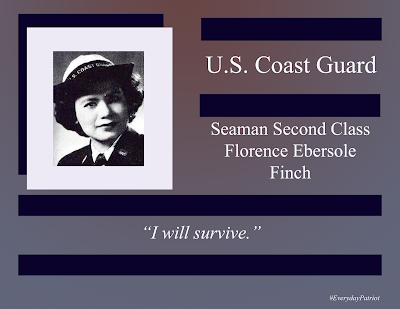 Working at G-2 intelligence prior to the start of WWII, she had married a sailor, Charles Smith, who was killed during the Japanese invasion.

During the Japanese occupation, she suppressed her mixed heritage (her father was an American, her mother Philipino) and worked at the Philippine Liquid Fuel Company which was under Japanese control.

Seaman Finch used her position to assist the Philippine resistance movement, including obtaining supplies and helped sabotage enemy efforts from June 1942 until her discovery and arrest in October of 1944. She also smuggled supplies and food to prisoners.

After her arrest, she was severely tortured, starved, and often imprisoned in a small box until the liberation of the Philippine Islands in February 1945.  She weighed only 80 pounds when rescued.

She moved to Buffalo New York and enlisted in the U.S. Coast Guard, serving until 1946.  She was awarded the Medal of Freedom and the Asiatic-Pacific Campaign Ribbon and was the first woman to receive that honor.