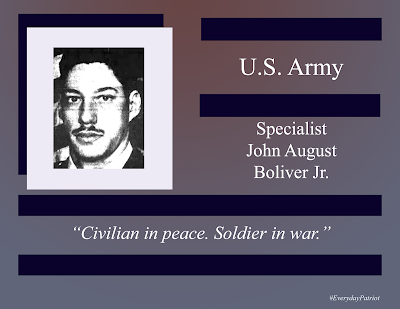 Specialist John August Boliver Jr. was born on May 10, 1963, in Louisville, Kentucky.

He enlisted in the U.S. Army in 1983 and was assigned to Fort Hood Texas.  He was briefly assigned overseas in Germany before being discharged from active duty in 1986.

Specialist Boliver transitioned his service to the Pennsylvania Army Reserves and was responsible for the mechanical maintenance at a local hospital before his reserve unit deployed to Saudia Arabia during Operation Desert Storm/Desert Shield to provide water purification and distribution.

On February 25, 1991, Specialist John August Boliver Jr was killed when a SCUD missile struck the warehouse that was serving as the barracks for the 14th Quartermaster Battalion. He rests in the Monongahela Cemetery, in Monongahela Pennsylvania.