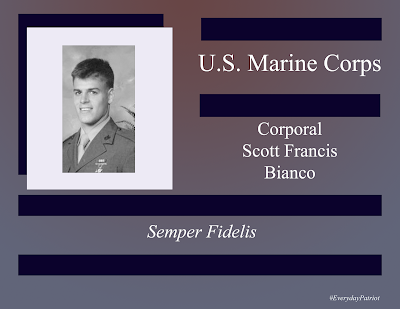 A lover of the outdoors, he was known to backpack.  He was also creative, enjoying art and music. Corporal Bianco graduated from Edwardsville High School, Edwardsville, Illinois, in the Summer of 1987 and enlisted in the US Marine Corps in December of the same year.

After boot camp, he trained with the engineering corps and was then assigned to the 1ST Marine Division, 1ST Landing Battalion in 1990 and deployed with his unit to Saudia Arabia.

On February 17, 1991, during the grueling Forward Logistic Base set up prior to Operation Desert Storm, Corporal Bianco's forklift toppled from a pier and trapped him underwater.