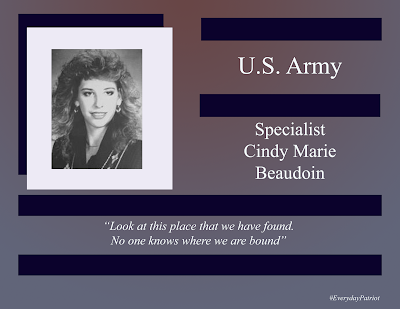 Specialist Cindy Marine Beaudoin was born on July 20, 1971.  She was raised in Plainfield Connecticut and graduated from Plainfield High School. She enlisted in the US Army National Guard and trained as a medical technician.

Specialist Beaudoin had just begun her first year at the University of Connecticut when the Gulf War erupted and in January 1991, she withdrew from college and deployed with the 142nd Medical Company.

On February 28, 1991, while on route to help an injured soldier, an explosion hit the convoy truck Specialist Beaudoin was traveling in, fatally wounding her. She died en route to the field hospital.