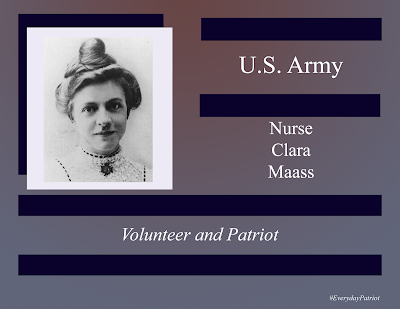 Nurse Clara Maass was born on June 28, 1876, in East Orange New Jersey. She showed an early interest in caring for others, working first as a mother's helper before she attended the newly created Christina Trefz Training School for Nurses, and in 1895, was one of its first graduates.

By1898 she was the head nurse at Newark German Hospital and seeking to expand her skills.  She volunteered as a contract nurse for the U.S Army and in October 1898 Nurse Clara Maass was assigned to the Seventh Army Corps and was assigned to field hospitals in Jacksonville Florida, Savannah Georgia, and Santiago Cuba. She then volunteered to serve with the Eighth U.S. Army corps and deployed to the Philippines, until contracting dengue fever in Manilla forced her to return stateside to recover.
Nurse Maass had, by this point, spent much of her career treating the tropical infectious diseases (Typhoid, Malaria, Dengue, and Yellow Fever) of the Caribbean, so when approached by Captain William Gorgas to help with Major Walter Reed's Yellow Fever Commission, she volunteered again.
Assigned to the hospital in Santiago Cuba, she volunteered in March 1901 to be bitten by a mosquito, contracting a mild form of Yellow Fever, then, on August 14, 1901, she volunteered to be bitten again, in an attempt to show immunity.  Unfortunately, her earlier case did not confer enough immunity and Nurse Maass contracted Yellow Fever on August 18 and died on August 24, 1901.
She was initially interred with full military honors in Santiago Cuba, however, Nurse Clara Maass now rests in the Fairmont Cemetery, Newark New Jersey.
Labels: Army Biography Died in Service Spanish American War
Location: East Orange, NJ, USA