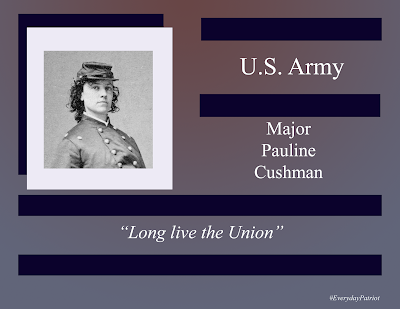 She grew up in Grand Rapids Michigan after her parents left New Orleans to start a trading post.  While growing up in Michigan, she learned to hunt, canoe, and track animals and was, by some reports, better at it than her brothers.

Drawn to the call of the theater, she left for New York and adopted the name, Pauline Cushman.  After the death of her husband, a former theater musician who had enlisted in the US Army, from "camp fever" (probably malaria or typhus), Major Cushman left New York and established herself with a production of "The Seven Sisters" in Louisville Kentucky in 1862.

A scene in the play required her character to give a toast and she was approached by two Confederates to make the toast to Confederate president Jefferson Davies.  She did (after consulting with the US Army) and was immediately fired from the production, however, the act ingratiated her with the Confederate population in the area and allowed her to act as a spy for the US Army.

Major Cushman eventually crossed enemy lines, using the cover story of locating one of her brothers (who was a Confederate soldier) but when battle plans and drawings were found in her shoes, Confederate General Braxton Bragg ordered a military trial and with a guilty verdict returned, prepared to execute her by hanging.  Fortunately, she was ill and wounded.  Ill enough that (with her acting skills) her hanging was postponed.  She was rescued when the US Army troops overran the area.

After the war, Major Cushman began touring, giving lectures about her experiences, living briefly in San Franciso before moving to Casa Grande Arizona where she co-operated a hotel and livery.

In 1893, Major Pauline Cushman would return to San Franciso.  Plagued by chronic pain from her wartime service, she would die by morphine overdose on December 2, 1893.  She rests at the Presidio National Cemetry.
Labels: Army Biography Civil War
Location: Grand Rapids, MI, USA