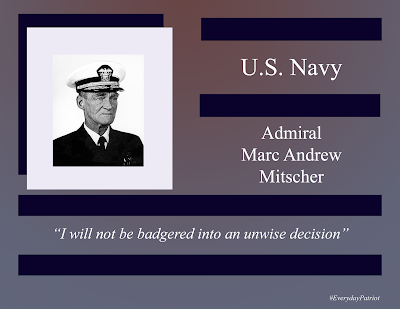 His parents relocated while he was young and he grew up in Oklahoma City, Oklahoma.

Admiral Mitscher's attended the US Military Acadamy at Annapolis, but washed out his sophomore year, after receiving poor grades and 159 demerits.  Undeterred, he reapplied, beginning again as a first-year plebe and successfully graduating on June 3, 1910.

Admiral Mitscher served his two-year tour aboard the USS Colorado before moving to the USS California on the West coast and then, earning a spot into the newly created naval aviation division in1915 and on June 2, 1916, Admiral Mitscher became Naval Aviator #33.

His first assignments as an aviator were aboard the USS North Carolina and the USS West Virginia for catapult experiments and the early development of launching planes from a ship, although during this period of time, planes were mostly used for scouting and spotting purposes, not combat. Then, in 1919, when the US Navy first attempted to cross the Atlantic, Admiral Mitscher was one of the three aviators picked to make the attempt.  Unfortunately, his plane, NC-1 had to be set down off the coast of the Azores after heavy fog caused the loss of a visible horizon.

He was briefly assigned to the USS Aroostook and as the Commander of the Naval Air Station in Anacostia before being assigned to the Navy Bureau of Aeronautics and began to prepare the documentation and evidence for the Morrow Board, which was established to create a National Aviation policy, including the control of aircraft, both civilian and military.  It was Admiral Mitscher's work that helped secure naval control over any sea-based aviation.

His work after the board focused almost exclusively on naval aviation systems and development, including serving as the assistant chief of the Bureau of Aeronautics.  Admiral Mitscher then received command of the newly created Yorktown class aircraft carrier the USS Hornet and was taking her through her initial training during the attack on Pearl Harbor. Admiral Mitscher was also the consultant behind General Jimmy Doolittle's idea to launch B52's from an aircraft carrier.
Admiral Mitschner commanded the USS Hornet through the Doolittle Raid.

Admiral Mitschner also commanded the USS Hornet through the Battle of Midway before being moved to Guadalcanal as the Commander of the Air Solomon Islands (COMAIRSOLS).  He was then assigned as the commander of Task Force 58, which challenged the Marshall Islands, Truk, Satawan, and Ponape, as well as the Battle of the Philippine Sea.

After the war, he briefly commanded the 8th Fleet before being assigned, in 1946, as the Commander in Chief of the US Atlantic Fleet.