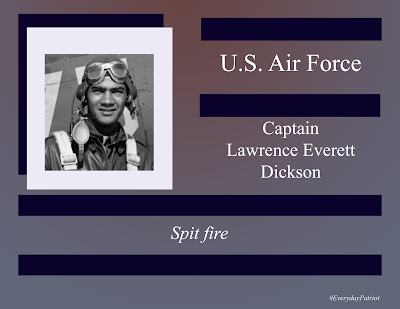 Captain Lawrence Everett Dickson was born on May 31, 1920.

A South Carolina native, he relocated to the Bronx in New York.

He was an accomplished musician, playing the guitar prior to his enlistment and he always carried a harmonica during his missions.

On March 25, 1943, Captain Dickson enlisted in the US Army Air Services (Air Force) and reported to Tuskegee Airfield for training and then deploying with the 100th fighter squadron to Italy.

While flying along the border between Italy and Austria, Captain Dickson's P-51 Mustang suffered engine failure and crash-landed.

Originally declared missing and non-recoverable Captain Dickson was memorialized on the Tablet of the Missing at the Florence American Cemetery, however, in 2012 his plane was discovered and was excavated in 2017.  Captain Lawrence Everett Dickson has been repatriated and now rests in Arlington National Cemetery.  Also recovered was his ring, engraved with his and his wife's initials.
Air Force Biography Missing WWII
Location: The Bronx, NY, USA