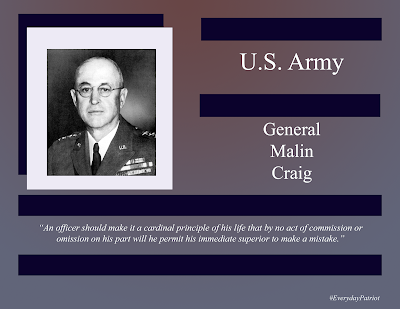 His initial assignment with the 4th Infantry Regiment lasted only a few short months before he was transferred to the 6th Cavalry Division and deployed to Cuba to participate in the Santiago Campain.

After his redeployment, he was briefly assigned to the Western outposts in Wyoming and Oklahoma before departing to China in 1900. General Craig was then deployed to the Philippines.

After General Craig returned stateside, he attended the Infantry and Cavalry School and the Staff College before being assigned to the post of Regimental Quartermaster at Fort Clark.  General Craig then returned to the classroom, graduating from the Army War College in 1910.

After WWI General Craig would command the District of Arizona, command the Army's Cavalry School, command the Panama Canal Zone, and would serve as the President of the Army War College before being appointed the Chief of Staff of the United States Army.

General Craig would briefly retire in 1939 only to be reactivated in 1941 when the US faced involvement in WWII, and he was appointed to head the War Department Personnel Board, a position he would hold until his death on July 25, 1945.