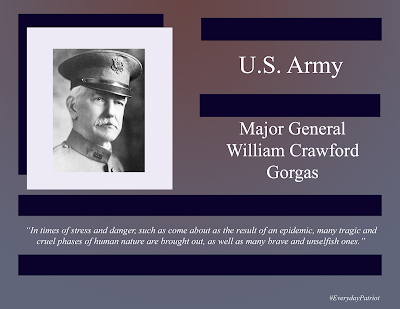 Major General William Crawford Gorgas was born on October 3, 1854, in Toulminville, Alabama.  He attended college at the University of the South and completed his medical training and residency at Bellevue Hospital Medical Center.  He received his appointment to the US Army Medical Corps in 1880.

By 1889 he was assigned to the post of Chief Sanitary Officer in Havana Cuba where he was instrumental in continuing Major Walter Reed and Carlos Finlay's work in proving the mosquito to be the vector of yellow fever.

In 1904, he was assigned to Panama, again as the Chief Sanitary Officer and it was his work of fumigation, mosquito netting, and swamp drainage protected workers and allowed the Panama Canal Project to be completed.

Major General William Crawford Gorgas served as the president of the American Medical Association in 1909 and was appointed Surgeon General of the Army in 1914.

Major General Gorgas again saved lives in WWI and by insisting on better buildings and sanitation, WWI became the first war that more soldiers died from combat injuries than from infectious disease.

He retired from the Army in 1918 but continued his work in sanitation improvement until July 3, 1920, when Major General William Crawford Gorgas suffered from a stroke.  He rests in Arlington Cemetery.