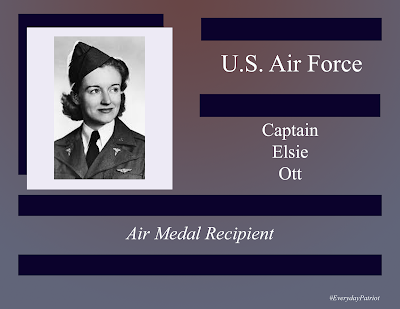 Captain Elsie Ott was born on November 5, 1913, in Smithtown New York.  After graduating from Smithtown High School in 1933, she went on to attend nursing school at Lenox Hill Hospital School of Nursing in New York City, graduating in 1936.

Captain Ott joined the US Army Air Corps Nursing Corps in 1941.  After some initial posts within the US, she deployed to Karachi India.

On January 17, 1943, Captain Ott became the first woman to earn the Air Medal when she was the sole flight nurse on the first intercontinental air evacuation. This historic flight, from Karachi India to Walter Reed Hospital in Washington DC, took a week.  Captain Ott had full charge of five patients on this grueling flight and was assisted only by a medical technician.

After her return to India, she was assigned to the newly created 803rd Military Air Evacuation Squad and, aided with the detailed logs she had kept on the first historic flight, helped create the air ambulance service.

Captain Ott left the Air Force in 1946, got married, and moved to Wheaton Illinois.  She remained out of the public eye until 1965 when she appeared to christen the new C-9 "Nightingale" Air Ambulance.  She later retired to California.