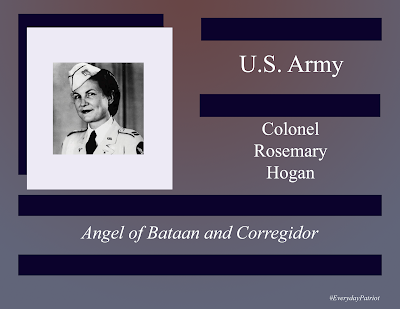 Colonel Rosemary Hogan was born on March 13, 1912, in Ahpeatone Oklahoma.  She was an incredible student, graduating as the class valedictorian and earning a nursing scholarship.

She enlisted in the US Army in 1936.  She was stationed on posts within the US until the fall of 1941 when she was transferred to the Philippines.

The US Army kept attempting to move the hospital inland, but still, it fell under attack and in March 1942, Colonel Hogan was wounded during an attack on the hospital.

By April 1942, she and all the remaining nurses on the island were captured by enemy forces and taken to the Santo Tomas Internment Camp. Colonel Hogan would remain a prisoner of war until 1945 when the nurses (who would come to be known as the Angels of Bataan and Corregidor) and other prisoners were finally liberated.

After her release and recuperation, Colonel Hogan served on various posts as Chief Nurse, including a period at Langley's Tactical Command.