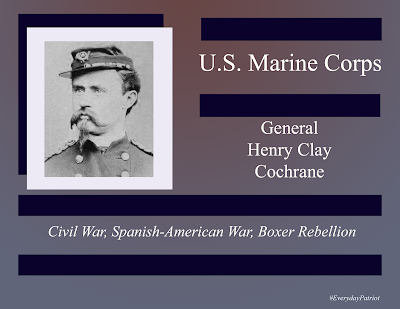 General Henry Clay Cochrane was born on November 7, 1842.  In 1860, he started a career as a teacher but, it was interrupted by the beginning of the civil war and chose to enlist for the Union military instead.

General Cochrane tried to apply for a commission to the Marine Corps, but at 18, he was considered too young.  Instead, he would volunteer in the US Navy, serving as a Warranted Acting Master's Mate. He participated in most of the Naval battles that occurred in the early years of the Civil War.  He received his commission into the US Marine Corps in May of 1863.

General Cochrane was, from the beginning of his career,  a stickler for protocol and form. It was these traits earned him a prestigious assignment on President Lincoln's honor guard during his Gettysburg address and a place with the US honor guard that attended the coronation of Czar Alexander III.

He was more than just a parade marine. General Cochrane served aboard the USS Lancaster when the British fleet bombarded Alexandria in July of 1882 and he landed with Lieutenant Littleton Waller and other marines to protect the US embassy from rioters and looters during the conflict.

During the Spanish American War, General Cochrane was the second in command of the 1st Marine Battalion, which landed at Guantanamo Bay on June 9, 1898. During the Boxer Rebellion of 1900, he commanded the First Marine Regiment through the China Relief Expedition.

General Cochrane retired from the Marine Corps in 1905 and returned to his home town of Chester Pennsylvania.  He died on April 27, 1913, and rests in the Chester Rural Cemetery.