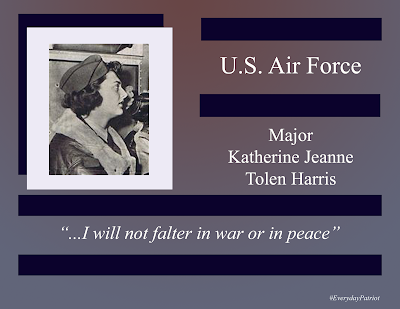 Major Katherine Jeanne Tolen Harris was born on April 13, 1919, in Langdon, North Dakota.  She graduated from St. Catherine's Hospital School of Nursing in 1939 and then enlisted on May 9, 1941.

She was photographed, along with several other flight nurses for Look Magazine's article "Invasion Heroine: The Flying Nurse".

Major Tolen Harris successfully complete many air evacuations throughout her career, spanning more than ten years, through WWII and into the Korean War before leaving the service on May 4, 1953, to devote time to her family.