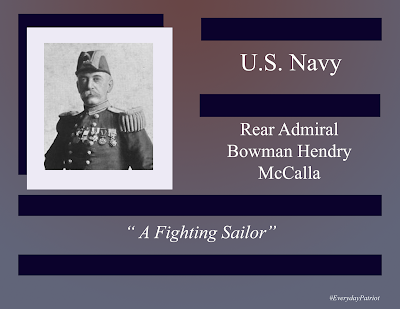 He was appointed to Annapolis on November 20, 1861, and graduated with the class of 1864, completing his tour aboard the USS America.

From 1864 to 1874, Rear Admiral McCalla was assigned to various boats, including his first assignment aboard the USS Marblehead, before returning to Annapolis as an instructor. He would return to the sea aboard the USS Powhatan in 1878.

While assigned to the Bureau of Navigation, Rear Admiral McCalla led an expeditionary force of 750 men into Panama to aid the Colombian government in saving the city from liberal armies.  The force was too late to prevent the burning of Panama City.

When he returned to the Navy, he was assigned to Pearl Harbor Naval Ship Yard before taking command of the USS Marblehead in 1897.  While commanding this ship, he would participate in the blockade of Cuba and the severing of Cuba submarine cables during the Spanish-American War,

Rear Admiral McCalla would return to the US in 1902, taking command of the Naval Yard at Mare Island until he retired on June 19, 1906. He died on May 6, 1910, and rests in Arlington National Cemetery.
Labels: Biography Boxer Rebellion Navy Panama Expedition Spanish American War
Location: Camden, NJ, USA