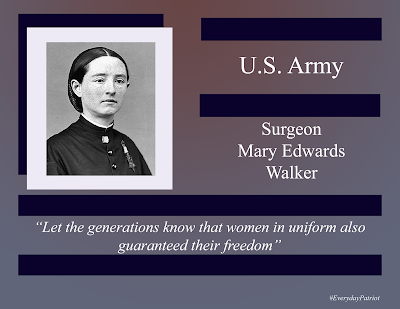 Surgeon Mary Edward Walker was born on November 26, 1832, in Oswego New York.  She graduated from the Falley Seminary in Fulton New York and then worked as a school teacher in Minetto New York until she had saved enough money to attend Syracuse Medical College.

After medical school, while she was working to establish her private practice, she would embark on a life-long campaign against the corsets and multiple petticoats of the era, insisting (rightly) that the corsets caused postural and internal organ damage and that the trailing petticoats harbored and spread germs.  She would even write an article to The Sibyl called "A Review of the Tastes, Errors, and Fashions of Society About Women's Dress".

When the Civil War erupted, she volunteered for the US Army as a surgeon but was rejected and told she could be a nurse. Instead, she would work as an unpaid volunteer surgeon at the First Battle of Bull Run and at the Patient Office Hospital.

In September of 1862, she once again tried to enlist, this time as a spy and was again refused.  Surgeon Walker would volunteer again, unpaid, as a front line surgeon during the Battle of Fredricksburg.

It would be the Battle of Chickamauga, in September of 1863, before she would be employed as a "Contract Acting Assistant Surgeon".  Surgeon Walker would later be assigned as the assistant surgeon of the 52nd Infantry.

In April of 1864, she would be captured and sent to Castle Thunder in Richmond Virginia, where she remained a prisoner of war until August when she was exchanged for a Confederate prisoner.
After her release, she would become the assistant surgeon for a women's prison in Kentucky.

After the war, in November 1965, she left the Army to return to civilian life and she was awarded the Medal of Honor by Andrew Johnson for her services during the war, she was also offered a small pension.

Surgeon Walker would return to private practice and to her campaign to alter women's fashion to a healthier version.  While in the war, she would wear a knee-high skirt and bloomer combination, but, in her later years, she was known to eschew the skirt altogether and appear in trousers and other "men's wear". She had been arrested on more than one occasion for this.

She would spend the rest of her career as a physician, writer, lecturer, and suffragette, dying on February 21, 1919.  Surgeon Mary Edwards Walker rests in Rural Cemetery, Oswego NY.

*In 1917, Surgeon Walker's and approximately 900 other Medal of Honors, because they were considered civilians. This decision was re-evaluated in 1977 and because of her front line work and her experience as a prisoner of war, her Medal of Honor was reinstated.  Surgeon Mary Edward Walker remains, at the date of this writing, the only woman to receive the  Medal of Honor.