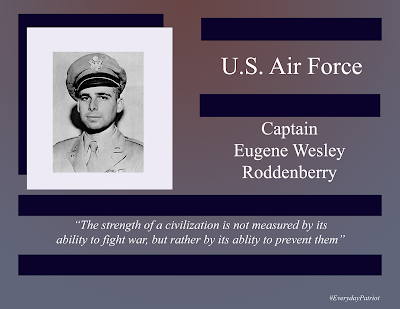 His family moved to Los Angeles in 1923 and he would keep a home in southern California most of his life.

Captain Roddenberry read a lot in his youth and was especially enthralled with pulp magazines.

Wanting to become a pilot, he enlisted in the US Air Force on December 18, 1941, eleven days after the bombing of Pearl Harbor, through the Civilian Pilot Training Program.

He would deploy with the 394th Bomb Squadron to Bellows Air Field in Oahu.  On August 2, 1943, while flying out of Espiritu Santo, his plane, the "Yankee Doodle", overshot the runway, killing Sergeant John P. Kruger and Lieutenant Talbert H. Woolam.  Captain Roddenberry was cleared of any fault during the investigation and tribunal and would return stateside as a crash investigator for the US Air Force.  During this period, as a passenger, he was involved in another plane crash.

Recruited by Pan Am after the war, he would fly as a commercial pilot until June 18, 1947, when he was involved in a third plane crash. Captain Roddenberry resigned from Pan Am on May 15, 1948, and would not pilot an airplane again.

He began working for LAPD in the traffic division before being promoted to the position of speechwriter for the chief of police. During this period he was the technical advisor to Mr. District Attorney and would start writing his first stories, under the name "Robert Wesley".  He would resign from LAPD in 1956 to write full time.

Captain Roddenberry would write television scripts, first for Ziv Television, earning a Best Teleplay award from the Writer's Guild in 1958 for an episode of "Have Gun - Will Travel", before he began writing with Screen Gem, where he would produce "The Lieutenant".

In 1964, Captain Roddenberry registered a new television series, one that created a beautiful vision of the future, with the Writers Guild.  The Star Trek series would evolve from these early scripts and begin airing in 1966.

After the end of the original series and a couple of well-publicized flops in the 1970s, Captain Roddenberry took to the lecture/convention circuit to make ends meet.  His appearances kept Star Trek alive, reviving interest in science fiction and allowing the creating of the animated series, the movies, and the numerous spin-offs.  Captain Roddenberry would remain active with Star Trek fans throughout his life.

He would receive the 1991 Humanist Arts Award from the American Humanist Association.