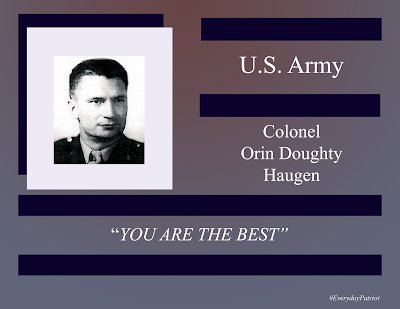 Colonel Orin Doughty Haugen was born on August 18, 1907, in Wyndmere North Dakota.  He would graduate from the US Military Acadamy at Westpoint in 1920 and be assigned to the infantry.

He was known to be an avid horseman and was a regular player in area polo matches.  He was also an active hunter, including fox hunting.

In 1940, Colonel Haugen volunteered for training for the newly created paratrooper infantry training and would become a commander of the 501st Infantry.  His training methods and discipline would come to define the role of a paratrooper in the US Army.

During WWII his paratroopers would make a name for themselves in the Leyte and Luzon campaigns.

Colonel Orin D. Haugen would be hit by mortar fire on February 22, 1945, during the Battle of Manilla, while his unit was attempting to free the prisoners from the Los Banos prison camp.  They would succeed on February 23.

He rests at the Golden Gate National Cemetery in San Francisco California.