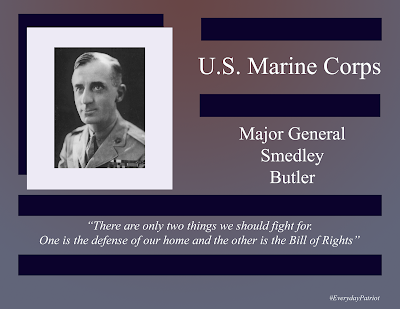 Major General Smedley Butler was born on July 30, 1881, in West Chester Pennsylvania.  He completed his early education at the West Chester Friends Graded School before attending the Haverford School, where he was the captain of the baseball team and a quarterback of the school's football team.

He would leave Haverford a little before 17th birthday (and graduation) to enlist in the US Marine Corps, shortly after the start of the Spanish American War.  The Haverford School would still award him to his diploma on June 6, 1998, on the basis of his credits.

Major General Butler had to lie about his age to enlist.  He was commissioned as a 2nd Lieutenant and deployed to Guantanamo Bay, arriving shortly after its capture.  After spending four months at sea aboard the USS New York, he was briefly mustered out.

Returning to the Marine Corps in April of 1899 as a 1st Lieutenant, he deployed to Manilla, where he led a team of 300 Marines to take the town of Noveleta. It was here that Major General Butler would get the throat to waist tattoo of an eagle, globe, and anchor he was known for.

He was then deployed to China, taking part in the Battle of Tientsin and the Gaselee Expedition, where he was wounded trying to rescue another marine. He would earn a brevet medal for his actions during the Boxer Rebellion.

Major General Butler was then sent to the Caribbean and in 1903 traveled into Honduras to defend the US Consulate when fighting broke out between the Bonillista and the Honduran government.  He would earn the nickname "Old Gimlet Eye" during this mission because he was suffering from a tropical fever and had severely bloodshot eyes.

In 1909, he would be stationed in Panama. His was the closest unit when the Nicaraguan civil war broke out in 1912. Major General Butler was ordered to secure Granada from the rebels.  His unit would come under fire during the Battle of Masaya in September 1912.  The marines would then spend the next month engaging rebels and removed the last pockets of rebels in the assault that captured Coyotepe Hill in October.  He would return to Panama until 1914.

After the April 1914 Tampico affair, Major General Butler would deploy to Mexico and lead a battalion into the Battle of Veracruz. This particular conflict awarded a high number of Medals of Honor.  Major General Butler felt that he did nothing heroic during the campaign and tried to return it.  He was ordered to keep it and wear it.

Major General Butler would then find himself leading a unit into Haiti after the Cacos assassinated the Haitian President in 1915.  After being ambushed outside of Fort Dipite, he and his men would clear rebels from Southwestern Haiti, a campaign that ended in the Battle of Fort Riviere.  He would earn another Medal of Honor for his actions during these battles.

When WWI broke out and he deployed to Europe, Major General Butler was assigned, to his disappointment, to the command of Camp Pontanezan in Best France (he had hoped for an assignment on the Western Front). Camp Pontanezan was the launching spot from the American Expeditionary Force and it was known for its unsanitary conditions.  It would be here that he would earn the nickname "Old Duckboard" after he commandeered every available duckboard in the area to raise the camp out of the mud.

Major General Butler then spent time stateside, taking assignments as the Commander of the Marine Barracks at Quantico and briefly became Philadelphia's Director of Public Safety, where he carried out raids on over 900 illicit bars and confronted the corrupt police force of the prohibition era. He was also assigned to the position of base commander of the Marine Corps Base, San Diego before he again deployed overseas to China to command the Marine Expeditionary Force in Tientsin from 1927 to 1929.

On October 1, 1931, Major General Butler would retire from the US Marine Corps.

He grew reflective upon his military career during his last years of service and after his retirement began to speak out against war profiteering and the use of US Military personnel to protect business interests overseas. He ran a senate campaign in 1932, using his anti-war sentiments as a platform and he testified before Congress in 1934 about the Business Plot, which was an alleged plan between the tycoons of Wall Street to overthrow President Roosevelt.  The Plot was deemed without merit.

In 1935 he wrote the book "War is a Racket" where he drew upon his experiences fighting in the Caribbean and the Banana Wars. He would also become the spokesman for the American League Against War and Fascism.