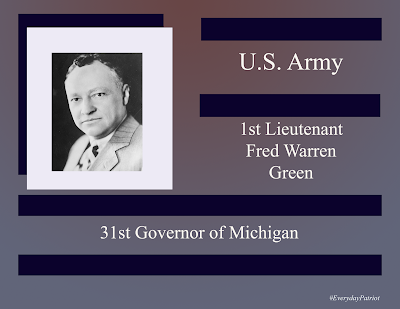 1st Lieutenant Fred Warren Green was born on October 19, 1871, in Manistee Michigan.  He graduated from Michigan State Normal School (now Eastern Michigan University) and in 1898 he would receive his law degree from the University of Michigan.

He was an avid football fan, playing the game collegiately and would coach and manage teams most of his life.

He served in the Spanish American War with the 31st Michigan Volunteers, deploying on May 8, 1898, for Cuba.  His unit was fortunate and didn't suffer any combat-related casualties, although there were challenges with tropical diseases. After his return to Ypsilanti, Michigan in May of 1899, he would become the city attorney.  He also entered into a partnership with the Ypsilanti Reed Furniture Company.

1st Lieutenant Green moved to Ionia in 1904 and entered into politics. First serving as a Republican delegate before becoming the mayor of Ionia (where he established the Ionia Free Fair in 1915). He would become Treasurer of the Republican National Party in 1915 and on November 2, 1926, he was elected the 31st Governor of Michigan.

Immediately after taking governorship, he would have to deal with the Bombing of Bath School, an incident of domestic terrorism in 1927 that would kill 44 people, 38 of them school children. He would personally help with relief efforts.

1st Lieutenant Green would also oversee the creation of seven state parks, a fish planting program, and the modernization of Michigan highways during his tenure as governor.

He retired from office in 1931 to fish and hunt.  He would also devote his retirement years to activities in the Free Masons, Elks, and Rotary clubs.