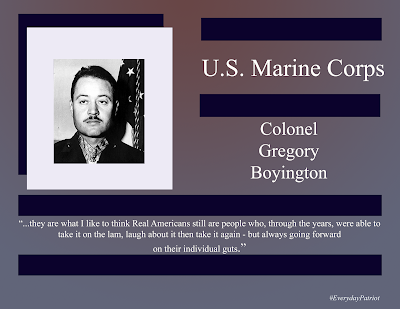 Colonel Gregory Boyington was born on December 4, 1912, in Coeur d'Alene Idaho. His family moved to Washington while he was young and he graduated from Lincoln High School, in Tacoma Washington.

He attended the University of Washington, where he was on the wrestling and swim teams. Colonel Boyington was also in the fraternity Lamda Chi Alpha, and participated in ROTC.  He graduated in 1934 with a BS in aeronautical engineering and was commissioned a second lieutenant in the US Army Reserves.

In 1935 he would try to gain a seat in the cockpit by enlisting under the Aviation Cadet Act. Unfortunately, the code disallowed married men and he was married.  Colonel Boyington found a way around this rule.

Boyington was the colonel's birth name. Up until this point, though, he had been using the name Gregory Hallenbeck, which was the last name of his mother's second husband. While there was a recorded marriage for Gregory Hallenbeck, there wasn't any record of a marriage for Gregory Boyington and he would enlist in the US Marine Corps under that name.

He received his wings on March 11, 1937, and would be assigned to the 2nd Marine Aircraft group.

Colonel Boyington would tie Captain Eddie Rickenbacker's record of 26 downed planes when he himself was shot down.  He would remain a prisoner of war until August 29, 1945.

He would be awarded the Navy Cross and the Medal of Honor for his actions during WWII in 1945.  Colonel Boyington retired from the US Marine Corps on August 1, 1947.

In 1958 he would write his autobiography "Baa Baa Black Sheep" which would very loosely inspire the 1970s television series Black Sheep Squadron.