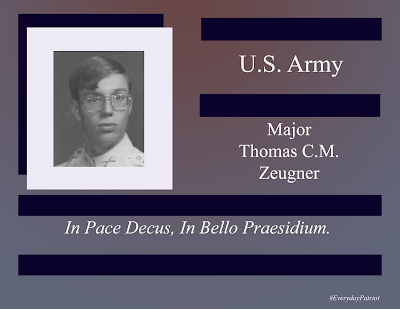 He graduated from the Fort Union Military Academy in 1972 and the Virginia Military Institute in 1976.

During his time at VMI, he was known for his sense of humor and his practical jokes.  Major Zeugner was a member of the varsity swim team and held the school record for the 200 M breaststroke. He graduated with a Batchelor of Arts in English.

Major Zeugner was a specialist in explosive ordinances and his career would take him throughout Europe, Turkey, and Korea.  He was also part of an ordinance team that swept for explosives during one of President Carter's trips to Israel.   Major Zeugner also receive a Master's degree from Troy State and would briefly teach military science at San Bernadino College.

Major Zeugner would deploy to Iraq during Desert Storm/ Desert Shield and on February 27, 1991, would die from wounds sustained while deactivating an explosive device. He rests at the Southlawn Memorial Park in Petersburg Virginia.