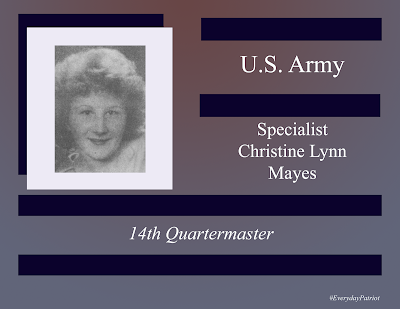 Specialist Christine Lynn Mayes was born on April 28, 1968 in Silver Springs Maryland.  She moved to Indiana Pennsylvania and graduated from Marion Center Area High School in 1986.

She enlisted in the US Army in 1987 and served a three-year contract, while stationed in Germany.  She remained in the reserves following the end of her contract.

Specialist Mayes was working on a degree in business when her reserve unit was called to deploy to Saudi Arabia during Operation Desert Storm / Desert Shield.