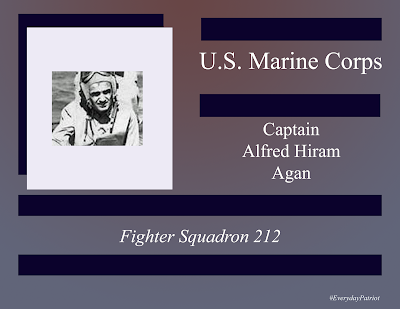 Captain Alfred Hiram Agan was born on July 6, 1919, in Carterville Iowa.  He attended Iowa State University before enlisting in the US Marine Corps in 1942.

He trained as a Corsair pilot and was the first marine pilot to use a proximity fuse.

Captian Alfred Agan would die in service on January 20, 1951, after his plane was damaged during a bombing run near Inchon South Korea.

He rests at the Fort Rosecrans National Cemetry in San Diego Calfornia.