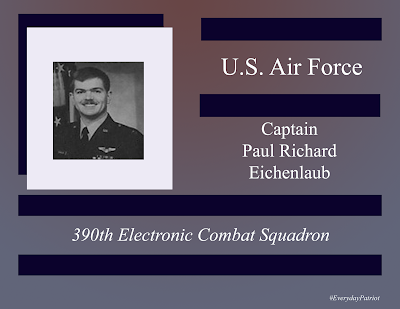 Captain Paul Richard Eichenlaub was born on October 29, 1961, in Altoona Pennsylvania.   He briefly lived in Hacienda Heights California before settling down in Northwest Arkansas. He graduated from the University of Arkansas, where he was a member of the Arnold Air Society.

He enlisted in the US Air Force and trained as an electronics war officer for the EF-11A Ravens.

Captain Eichenlaub deployed to the Persian Gulf during Operation Desert Storm/Desert Shield.  On February 14, 1991, his plane, while avoiding fire, crashed.