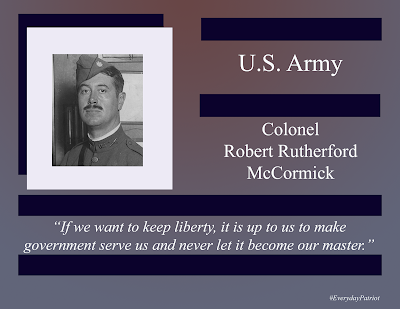 His early education was spent at the Ludgrove School in London England (his father worked for the Secretary of State).  When he returned to the states he attended the Groton School, and then Yale University, where he was a member of the Scroll and Key society.  After his 1903 graduation from Yale, he went on to Northwestern University School of Law.

Colonel McCormick began his activity in politics very early, acting as an Alderman in 1904 and in 1905, was elected to the Board of Trustees of the Chicago Sanitation Department. In 1907, the year he passed the bar, he was appointed to both the Chicago Permanent Charter Commission and the Chicago Plan Commission.

In 1908 he co-founded the law firm, Kirkland and Ellis and in 1910 took over as head of the Chicago Tribune, after the death of his grandfather and the abdication of his older brother.

In spite of his position, Colonel McCormick chose, in February of 1915, to travel to Europe as a war correspondent.

Colonel McCormick's military career began on June 21, 1916, when he joined the Illinois National Guard. Two days later he would be assigned to the Mexican border and on June 13,1917, when the Illinois Guard was absorbed into the US Army, he deployed to France.

Initially, he served as an intelligence officer on General Pershing's staff but wanted a more challenging assignment. Colonel McCormick would briefly attend artillery school before being assigned to the 5th Field Artillery Regiment.  He took part in the capture of Cantigny and the battles of Soissons and Saint-Mihiel.  Colonel McCormick also participated in phase two of Argonne.  He would leave active service on December 13, 1918, but would remain in the Army Reserves until his retirement on September 30, 1929.

He resumed control of the Chicago Tribune when he returned from the war.  Colonel McCormick was a staunch republican and would use the Tribune as a platform for his political views against US involvement in WWII and New Deal policies.

Colonel McCormick was very active in other areas of his life as well, he held ownership in WGN radio and was the 1936 founder of Baie-Comeau Quebec where he established a hydroelectric dam and paper mill.  He also briefly owned the Washington Herald.

When he died on April 1, 1955, he was still able to fit into his war uniform, which Colonel McCormick wore to his grave. He rests at his estate, called Cantigny.