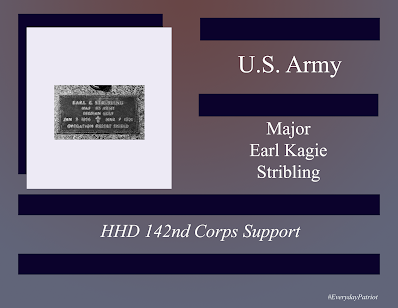 Major Earl Kagie Stribling was born on January 2, 1956, in Monroe Louisiana.  He graduated from Gilbert High School, where he played basketball.

He enlisted in the US Army on February 11, 1979, and was assigned to the Quartermaster General.

Major Earl Stribling deployed to the Persian Gulf during Operation Desert Storm/Desert Shield with the HHD 142ND Corps Support Battalion and on March 7, 1991, died in service from an infection.