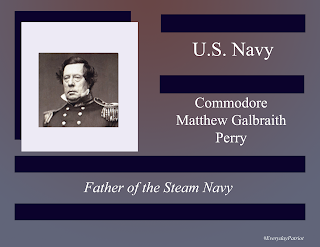 In 1809, at the age of 15, he enlisted in the US Navy and served above the USS Revenge and the USS President through the War of 1812, and participated in battles with HMS Little Belt and HMS Belvida.  He also served aboard the USS United States.

Following the War of 1812, he would head to the Mediterranean for the Second Barbary War before being transferred to the USS Cyane to patrol first around Liberia and then the West Indies in an effort to suppress the international slave trade.

His first command would come in 1821, aboard the USS Shark, and on March 25, 1822, he would physically plant the flag that claimed the Florida Keys for the US.

Commodore Perry was on shore duty in South Carolina from 1825 until 1830.  He commanded the USS Concord until 1833.  He would return to shore duty, this time at the New York Navy Yard until 1837, as the Deputy Commander. Here he would help establish the apprentice system for new seaman entering the US Navy and he helped develop the curriculum for the Naval Academy.  He was also a vocal advocate for modernizing the navy and increasing the use and production of steam-powered ships.

In 1845, at the beginning of the Mexican American War, he would return to sea as the captain of the USS Mississippi and captured the city of Fonterra. He supported the siege of Tampico and was also part of the siege of Veracruz. He would personally lead the July 1847 landing force into the city of San Juan Bautista.

In 1852 Commodore Perry was ordered by President Millard Filmore to establish trade with Japan.

He sailed into Edo Bay on July 8, 1853.  After much back and forth, including a "4th of July Celebration" that involved firing blank rounds from the ship's 73 cannons, Commodore Perry was allowed to land in Japan and to present a letter demanding that Japan open its shores to trade with the United States.

While allowing the Japanese shogunate and emperor time to assemble, Commodore Perry would explore Thailand, noting that it would be a great place to claim as a US territory (Congress would not act on his advice), before returning to Japan in February of 1854 and after more than a month of negotiations, the Convention of Kanagawa was signed, which opened the ports of Hakodate and Shimoda to American trade.

Congress would award him a grant of $20,000 (worth about $549,000 now) for his services and he would use the funds to write his memoir and report of the expedition called "Narrative of the Expedition of an American Squadron to the China Seas and Japan".  It was completed on December 28, 1857.

Commodore Matthew Perry would die on March 4, 1858, from rheumatic fever.  He rests at the Island Cemetery in Newport Rhode Island.