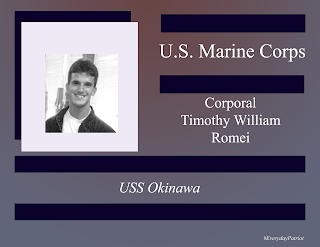 Corporal Timothy William Romei was born on March 11, 1968, in Poughkeepsie New York.  He moved to California with his family in 1980 and graduated in 1986 from Abraham Lincoln High School in Almeda California.

He enlisted in the US Marine Corps shortly after graduation and served aboard the USS Shasta and USS Caron before being assigned to the USS Okinawa, which deployed to the Persian Gulf to provide support during the Gulf War.

On October 8, 1990, conducting night missions, the UH-1 he was in collided with another over the Persian Gulf.