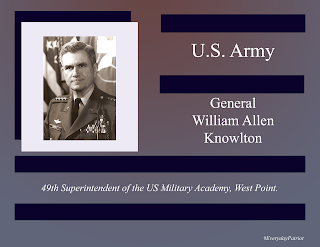 He graduated from the US Military Academy at West Point in 1943 and was commissioned a cavalry officer and assigned to the 7th Armored Division.

He would deploy to France during WWII and lead an assault platoon in occupied France. He also commanded recon missions into Germany.

After the war, he would be assigned to staff postings and to the Command College before he deployed to Korea with the 3rd Armored Cavalry.

General Knowlton would return from Korea to attend the War College and was then assigned command of a brigade at Fort Knox and then to a military attache in Tunisia.

After his time in Tunisia, General Knowlton would be assigned to the US Army Chief of Staff and then to the Office of the Secretary of Defense before he deployed to Vietnam, twice, to oversee civilian operations.

On March 23, 1970, he was assigned the 49th Superintendent of the US Military Acadamy at West Point, and he reaffirmed the academy's right to enforce the school's honor code with the Supreme Court.

After his tenure with the academy, General Knowlton was assigned command of the Allied Land Forces in Europe.

When General Knowlton retired from service, he would continue to lecture at the Armed Forces Staff College and act as an advisor for the Defense Nuclear Agency.